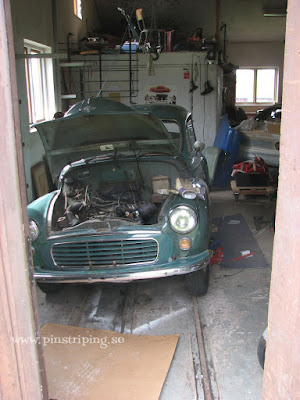 Ok. Thanks for asking. Here it goes:
Available in 1200cc, 1500cc and 1700cc form, but it's ancestry is the "Cologne" family, and shares some parts with the german Ford sixes 2.0, 2.3, 2.6, 2.8 and 2.9 litre engines. Oil pump, gas pump and some bearings are somewhat interchangable. The sixes will fit right on the Saab gearbox, but the radiator has to move to the back, and the front will still be so heavy it will ruin the driving. Some people use the Saab flywheel on the sixes. The difference is several Kilo's.

Unfortunately V4's aren't naturally well balanced, which is why it has an internal balance shaft, probably made by Satan. It's bearings are the weak point in this engine.

There is the legend that the Saab V4's rotate the other way than most other car engines. No truth in that, but... the belt pulley is on the balance shaft, not the crank. The shaft itself is driven off the crank by fiber cog wheels just like the camshaft, hence it looks like the engine is rotating the other way. When the balance shaft seizes its bearings, and it will, since Satan made it, the fiber drive breaks it's cogs, but the engine keeps running, albeit without the balancing shaft. So the main sprocket with it's fan belt and accessories stands still, but the engine is running. Has made some Swedes need straight jackets!

The outlets in the heads are of "siemese" type, meaning only one exit hole on either side of the engine. When seriously tuned, the heads are machined and dividers inserted/built in to divide the exhaust.

Looking at the top of the hierarchy in the Cologne family we see the 289 Ford smallblock in all it's glory, and with all it's own closest family. Ford U.S. made this V4 in the beginning by cutting a V8 in half, realizing the mistake and as a late revenge gave it to the germans.
I hope we Swedes didn't pay very much for it.
My girlfriend's Saab engine now has lighter than standard cam followers made by Crane Cams. The order no. is for the 289.

Saab engineers did a lot of testing and competing with these engines, and pictures exist of a full race track body with a 1700cc, bored and stroked out to two litres and supercharged! Some tuning stuff is still around thanks to them being tremendously popular in forest rallying in Scandinavia throughout the sixties and seventies.

In standard form they have a tiny Zenith carb, allowing a whopping 65Hp. In the last three years of manufacturing (1977-1980), Saab used the carb from their own tuning kit, a two port Solex, and suddenly 68Hp came out. Remember these cars weigh in under a ton in standard form. Getting a 5% power increase from swapping a carb will make a noticeable change.

(The 95 model; station wagon weighs in at 1040Kg with driver and a full tank of gas according to the registration papers. It seats seven (7) legally. It's a clever little bugger.)

In the ninetees my brother bought the most sought after intake. It's a cross-pattern intake allowing twin sidedraught Webers to be used. This carb set-up has just about the same size as the whole engine! Power well above 150Hp has been documented with this kind of intake on a full race engine. Worth little 20 years ago, a "Weber Cross", complete with Webers and the hi-rising special distributor, is gold today in Scandinavia. I've seen genuine kits with the price tag of fifteen hundred pounds.
Regards. Mark